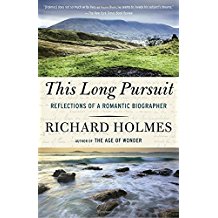 This Long Pursuit:  Reflections of a Romantic Biographer, Richard Holmes, 2016

Holmes, a distinguished British biographer of Shelley, Coleridge, and others, has written this third book of memoirs in a very interesting style.  He shares little of his own life, but much about the Romantic poets, scientists, and women writers who he has spent his life studying.  His method is referred to by the title of his first memoir, Footsteps, in which he follows the actual path of his subjects through their lives visiting places where they lived, visited, worked, studied, and died.  The first section of the book discusses his methods, from the specific notebooks he uses to the broad topic of memory and its undependability.  The second section deals with five fascinating women of the Romantic period (roughly 1770 which is when Cook set off on his circumnavigation to 1830, the year before Darwin’s voyage on the Beagle).  Margaret Cavendish, Zelide, Madame de Stael, Mary Wollstonecraft, and Mary Somerville comprise a remarkable collection of bright, talented, innovative, energetic, and slightly outrageous women who made their mark in this period.  The final section focuses on Holmes’ favorite Romantic writers—Keats, Shelley, Coleridge, Blake and the artist Thomas Lawrence.  The writing is fluid and vivid, and the topics are quite engaging.  The New Yorker review referred to Holmes as driven by “empathy, enthusiasm, and wonder.”  Nicely put.    A fine book for the lover of the genre of biography.  I hope to read the first two installments in his biographical triology

Cliffs of Fall and Other Stories, Shirley Hazzard (#2138)

How We Got to Now: Six Innovations that Made the Modern World, Steven Johnson...
Scroll to top