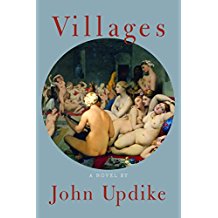 After reading nearly all of Updike for decades, this is the first novel of his that I’ve read in quite a while.  Recommended by Cynthia Ozick in her By the Book interview in the NYT Book Review, this is vintage Updike—-small town adultery drives an angst-ridden plot through America of the 1950’s, ‘60’s, and 70’s.  Owen MacKenzie, born and raised in small town, rural PA in a home of modest means, goes off to MIT and the world of computer software and marriage.  Raising four children in Middle Falls (great name!) he succumbs to serial adultery destroying his marriage, his business, and his family, not to mention his wife who dies in an auto accident on the way to see her divorce lawyer.  Owen ends up with the minister’s wife, Julia, in Haskell Crossing, another small town for retirees.  Updike is fixated on the adventures of married men’s genitalia which evidently provided him with a rich source of words as evident in his 20+novels and 3 Pulitzer Prizes.