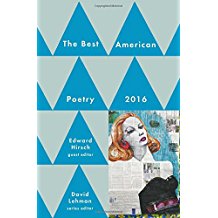 Published annually since 1988 and edited overall by David Lehman, the guest editor always has a profound influence on the poems chosen and the overall feeling and thrust of the volume. This year’s editor, Edward Hirsch, is a major figure in American poetry, writing a number of influential critical works, publishing his own poetry extensively, and teaching at U. of Houston for decades.  He has chosen a group of poets and poems which reject the artificial categorization of modernist and post-modernist and embrace an eclectic set of styles, topics, and sources.  His emphasis is on the lyric “I” vantage point and he indicates that he was drawn to “precision and surprise.  Memorable lines, craft deployed. Poems I couldn’t shake, texts that arrested me. Poems that demonstrated a certain kind of thinking, imagistic or metaphorical thinking, poetic inquiry.  Literary investigations, obsessions, intelligence.  Emotional accuracy….A kind of ruthless authenticity.”  Hirsch goes on to say that “Poetry enlarges our experience.  It brings us greater consciousness, fuller being.  It stands on the side of life, our enthrallment.”   It would be easy to cite at least a dozen ‘wow’ poems among the 75 poets in this volume, but it would fill pages.  Read the book, dipping into it for 4-5 poems at a time over days.  It’s a rewarding read.