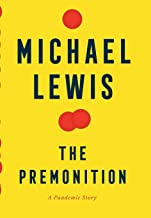 The Premonition by Michael Lewis 2021

This is a superb book which will be of interest to anyone who lived through the year of COVID.  Lewis, one of our most talented writer’s of non-fiction, weaves his usual magic as he identifies fascinating and unusual individuals who are the prime players in this story and then follows them through the complex and confusing early months of the pandemic.

Charity Dean, a divorced single mother with an MD degree, is the public health officer in Santa Barbara County when we meet her.  She will become one of the most important movers and shakers in implementing California’s ‘stay at home, shut the schools’ plan that saved thousands of lives while the Trump administration and CDC dissembled, lied, and stalled.  Her work was possible because she linked up with The Wolverines (so named from the title of a group of teen agers who resist a Russian invasion in the 1970’s movie Red Dawn), a group of doctors, government bureaucrats, and scientists who ignore hierarchy and ‘official channels’ and develop a game plan to limit the damage of the pandemic.  We meet Carter Mecher, Richard Hackett, Lisa Koonin, Bob Glass, Todd Park—names which you will come to know and love if you read this book, people who ignored orders from above and did the right thing.

The book makes it clear why the richest country in the world ended up with the highest death rate in the world—bureaucratic hesitation and cover-your-ass caution, Trumpian anti-intellectual and self-interest, a failed, under-funded and disorganized public health system, and other systemic problems.

It’s rare for me to feel that my review hasn’t measured up to the book, but in this case, it’s true.  I feel like I would have to write dozens of pages to capture Lewis’s story, so since I didn’t do that, you should just read the book. Here are villains and heroes enough to make the book both entertaining and informative.

The Haunted House and Other Short Stories by Virginia Woolf (#2688)