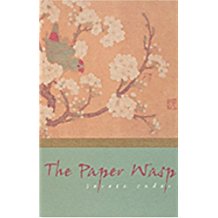 A slim poetry volume by a woman who teaches creative writing at Lesley.  Cader’s book has three sections. The first compares the history of paper making with the eponymous insect who does it naturally.  The second focuses on Cader’s pregnancy and delivery, and the third deals with a Russian poet, Eugenia Ginzburg who was imprisoned under Stalin but who survived.  These poems are subtle, clear, lyrical, and moving.  The best line is from a poem entitled Scapula which is built around anatomical terms heard while the author was a seriously injured patient after an auto accident—“…on the white table beneath/the laminated diagrams/of bodies, perfecting the absence of death.”  Cader’s poem Post appeared briefly on the Poetry Tree before it disappeared.  I’m waiting to hear back from her having written a letter requesting a copy of the poem which I’ve been unable to find in any of her three volumes.