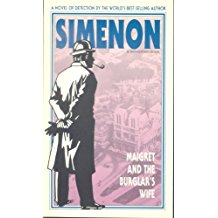 Maigret is once again drawn into a very unconventional murder investigation when a woman whom he had arrested as a prostitute many years earlier, asks him to find her husband, Sad Freddie, a known safe cracker who has fled after claiming to have seen a dead body in the home which he was burgling.  Maigret, working on the description of the home from Sad Freddie, finds the alleged murder scene but no body.  Using his psychological wiles, Maigret finally figures out that it is the mother of the dentist who has murdered her daughter-in-law.  A thoroughly Maigretian story with little or no action other than Jules stumbling around observing and then interrogating the suspect, in this case, the wrong one but with a correct outcome.  Fine story by Simenon.