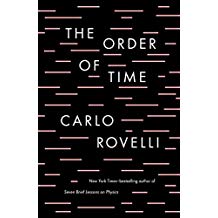 The Order of Time, Carlo Rovelli 2018

What a fascinating and complex book this is!  Rovelli, the author of a previous book, Seven Brief Lessons on Physics, takes the reader on a long and winding journey in which he first dispels the notion that there is such a thing as ‘time’ and ends up embracing the days of his life, the only time that really matters to a human being.  We go from Aristotle to Newton to Einstein and end up with Der Rosenkavalier by Strauss and Hofmannsthal with a side trip to Beethoven’s Missa Solemnis.  I tried, I truly did, to understand the first two sections of the book in which Rovelli argues that our notion of time is incorrect, that there is no present, no now, no direction from past to future.  Despite my pages of notes and my college level physics from the ’60’s (which is about as relevant as a  knowledge of cricket would be to a cricket!), I think I failed to fully grasp his argument about linear gravity, the ‘noncommutative algebra of Von Neumann”, and the observation that ” the distinction between present, past, and future becomes fluctuating: an event may be both before and after another one.”  Come again!  I would have thrown my hands up in frustration but for the final section where Buddhism, Beethoven, and Strauss save the day.  It turns out that what is important is human memory and the traces of the past, the unknowability of the future, and the reality of the sorrow, suffering, and beauty of the present. I can’t help but quote the lines from Der Rosenkavalier that Rovelli included:  I remember a little girl/But how can that be/Once I was that little Resi, and then one day I became and old woman?’/If God wills it so, why allow me to see it?/Why doesn’t he hide it from me?/Everything is a mystery, such a deep mystery/I feel the fragility of things in time./From the bottom f my heart, I feel we should/cling to nothing./Everything slips through our fingers./All that we seek to hold on to dissolves,/Everything vanishes, like mist and dreams…./Time is a strange thing./When we don’t need it, it is nothing./Then, suddenly, there is nothing else./It is everywhere around us. Also within us./It seeps into our faces./ It seeps into the mirror, runs through my temples…/Between you and I, it runs silently, like an hourglass…./Sometimes I feel it flowing inexorably./Sometimes I get up in the middle of the night/and stop all the clocks.”  An unusual book, science and philosophy, linear gravity and Proust all mixed together into a beautiful brew.