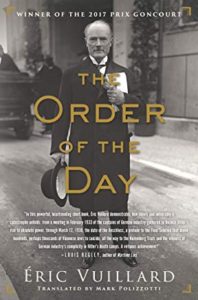 The Order of the Day, Eric Vuillard 2018

In language that is quiet, straightforward, and beautifully wrought, Vuillard tells the story of how Germany and Austria descended through a series of apparently minor events into the horrors that were WWII and the Holocaust.  Beginning with an average day in Berlin in February, 1933, he tells of a meeting of 24 of Germany’s leading corporate heads at Goering’s Presidential Palace where Hitler extorts huge sums of money for the Nazi’s upcoming election, one that he promises will be the last one in a Germany freed from communists and Jews.  The Krupps, Fabers, Opels and others pay their dues, and the book shifts to March, 1938 when Hitler is ‘invited’ into Austria and the Anschluss becomes a reality.  Vuillard makes it clear that the Nazi triumph was not inevitable.  Had Germany’s business leaders resisted, had Chamberlain and Daladier been firm instead of compliant at Munich, had Austrian politicians been better leaders and less cowed, etc etc, perhaps the Blitzkrieg would have been averted.  In fact, Vuillard shows how the invasion of Austria was a complete fiasco with tanks breaking down and jamming the roads.  What today looks like it was pre-determined was not so in the 1930’s.  Vuillard ends the book with two heartbreaking stories.  In one, he describes the hundreds if not thousands of Jewish men and women who committed suicide in the days after the Anschluss.  He quotes Walter Benjamin’s letter saying that Vienna authorities cut off the gas to Jewish homes because they were committing suicide with it and not paying their bills.  Vuillard goes on to list the German corporations who had supported Hitler in 1933 and which used slave labor from the concentration camps in the 1940’s.  “The tablemates from the meeting of February 20, 1933 made out just fine.  The war had been profitable.  Bayer took on laborers from Mauthausen. BMW hired in Dachau, Papenburg, Sachsenhausen, Natzweiler-Struthoff, and Buchenwald. Daimler in Schirmeck. IG Farben recruited in Dora-Mittelbau, Gross-Rosen, Sachsenhausen, Buchenwald, Ravernsbruck, and Mathausen, and operated a large factory inside the camp at Auschwitz. Agfa recruited in Dachau. Shell in Neuengamme. Schneider in Buchenwald. Telefunken in Gross-Rosen, and Siemens in Buchenwald, Flossenberg….. Of the six hundred deportees who arrived at the Krupp factories in 1943, only 20 remained a year later.”  Nearly 80 years later, telling this story remains important, and this superb book does so in a very effective way.  It was the deserving winner of the 2017 Prix Goncourt, the most prestigious French literary award.

Hiking with Nietzsche: On Becoming Who You Are, John Kaag (#2387)
Scroll to top