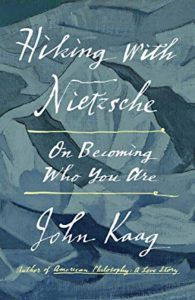 Hiking with Nietzsche: On Becoming Who You Are 2018

Kaag is a professor of philosophy at UMass Lowell whose previous book, American Philosophy: A Love Story, I very much enjoyed.  Not so much this one, a complicated, often dry and distracting, double biography of Friedrich Nietzsche, the German philosopher from the second half of the 19th C. and Kaag himself.  Like many young men, the author, as a 19 year old, was infatuated with Nietzsche’s Ubermensch, the OverMan, and spent weeks in the Swiss Alps tracing Nietzsche’s path through inns and trails.  He returns to the Alps nearly 20 years later as a twice married father of a 3 year old daughter, to retrace those steps and further explore the philosopher’s thoughts and walks.  At one point, he refers to Nietzsche’s ‘haunting aphorisms’ and that was the only level at which I was able to penetrate both Nietzsche and Kaag—‘Become who you are’ (the subtitle of the book), asceticism, decadence, endure, will to power.  Along the way we meet Adorno, Mann, Rilke, Holderlin, Ralph Waldo Emerson, and especially Hermann Hesse and his Demian and Steppenwolf.  Two themes which emerged from Kaag’s hikes were the importance that walking has had for some great philosophers and writers including Socrates, Aristotle, the Stoics, Rousseau, Kant, and Thoreau, and the ultimate decision for suicide for so many writers.  The writing is powerful and clear, but like many of the hikes Kaag and his hero took in the Alps, the way was steep, difficult, slippery, and in the end, lost in the clouds.

Your Duck is My Duck: Stories, Deborah Eisenberg (#2388)
Scroll to top