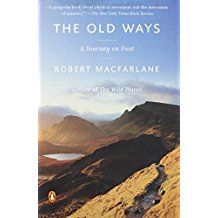 The Old Ways: A Journey on Foot, Robert Macfarlane, 2012

This is a wonderful book which bears further reading and reviewing.  The book is organized into four sections—Tracking (England), Following (Scotland), Roaming (Abroad), and Homing (England)—and each of these sections has chapters named for an important element in the walks—chalk, silt, water, peat, gneiss, granite, limestone, ice, snow, and flint.  A steady presence throughout is the poet, Edward Thomas (1878-1917), late to poetry, friend of Frost, killed in WWI’s waning days (‘Roads go on/While we forget, and are/Forgotten like a star/That shoots and is gone.” as one example of Thomas’s writing ”as a kind of dream map: an act of cumulative but uncentered imaginative cartography, a composite chart of longing and loss projected onto the actual terrains of his life.”), and Macfarlane calls on other walkers and writers of the past—Emerson, George Barrow, Bansho, John Clare, Wordsworth (‘we carry within ourselves evolving maps of the world which are of texture midway between life and books.’) , Hazlitt, Rousseau (‘I can only meditate when I am walking’), Walter Benjamin in A Berlin Childhood, “I have long, indeed for years, played with the idea of setting out the sphere of my life graphically on a map.”, Darwin’s ‘thinking path’ with 2 or 3 flint problems, Frost’s description of what he and Thomas do as ‘talks-walking’,   and two of my favorite artists whose work I own and whose work focuses on walking: Richard Long and Hamish Fulton.  Throughout, he makes the connection between walking and thinking:  “walking as the enabling sight and thought rather than encouraging retreat and escape; paths as offering not only means of traversing space, but also ways of feeling, being, and knowing.”, ‘walking as a means of personal myth-making’, ‘walking is not the action by which one arrives at knowledge; it is itself the means of knowing.’, ’’inner landscapes being powerfully shaped by outer.” “landscape has long offered us keen ways of figuring ourselves to ourselves, strong means of shaping memories and giving form to thought.” “Landscape is a noun containing a hidden verb:  landscape scapes, it is dynamic and commotion causing, it sculpts and shapes us not only over the courses of our lives but also instant by instant, incident by incident….Landscape as a collective term for the temperature and pressure of the air, the fall of light and its rebounds, the textures and surfaces of rock, soil and building, the sounds, the scents, and the uncountable other transitory phenomena and atmospheres that together comprise the bristling presence of a particular place at a particular moment.” He also has wonderful observations of walking:  ‘foot journeys involved the traveler’s usual mix of excitement, incompetence, ennui, adventure, and epiphany.’, that long familiarity with a place will lead not to absolute knowledge but only ever to further enquiry.”, “mind as a landscape of a kind and walking a means of crossing it.”  One of the best chapters is about Miguel Angel Blanco, whose Library of the Forest in Madrid comprises more than 1000 volumes, each book recording a journey made by walking and each contains the natural objects and substances gathered along that particular path. (‘To walk is to gather treasure.”) Once again, the reading is enhanced by Google maps which enabled me to find and experience (albeit, at my desk and screen), the Icknield Way, the Broomway in Essex, the seaways of the Minch and Shiant Islands between Skye and Lewis/Harris/Uist (‘trillions of tons of brine, a mountain range of water turning in obedience to the invisible force of the moon, starting the long slop back north and carrying our little boat with it,”), the bare rock of Sula Sgeir, the Ridgeway in Wiltshire.  A marvelous, thought-provoking and lyrical book of self and landscape.

The Hidden Life of Trees: What they Feel, How they Communicate, Peter Wohlleben...
Scroll to top