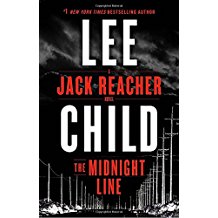 Jack Reacher, once again, steps off a bus to nowhere and finds himself in the middle of a major mystery case. This time, he’s in Sioux City, SD and spies a West Point class ring in a pawn shop window. He follows the ring backwards to a motorcycle gang in Sioux City to a crooked Laundromat owner in Rapid City, SD to a snow plow operator in Mule Crossing, WY. Multiple complications follow involving a former Army major who suffered devastating facial injuries in Afghanistan, her identical twin sister from Lake Forest, IL, a retired FBI private detective, and a bunch of bad guys in the middle of nowhere running a narcotics ring. Good story and impressive Child in which I didn’t know who Reacher was going to sleep with until the final two pages.

Bread and Roses, Too, Katherine Paterson (#2216)
Scroll to top