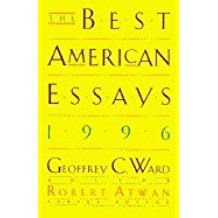 One of the best of the series, this volume is very interesting by virtue of being 21 years old. Ward, who was not known to me, has since the publication, racked up 7 Emmys for his collaborative works with Ken Burns on PBS historical shows and is a distinguished historian in his own right. The essays are mostly still fresh and relevant, though the ones that deal with specifics of the time seem to have gone by—The Million Man March, Michael Jackson, Elvis Presley, the assassination of Indira Ghandi. On the other hand, some of my favorite writers contribute works, some of which I still remember from the New Yorker—Gopnik on Charles Dodgson, Ian Frazier on the F Train, and William Styron on believing that he had syphilis as a young Marine in South Carolina. Edward Hoagland, Jane Brox, Mary Oliver, Joyce Carol Oates, Joan Acocella, James Fenton, Joseph Epstein, and Chang Rae-Lee all have fine pieces but my favorite two are one by Jonathan Raban about trout fishing in Washington state and James Alan McPherson about his apartment in Baltimore. Superb volume!

On Tyranny: Twenty Lessons from the Twentieth Century, Timothy Snyder (#22...