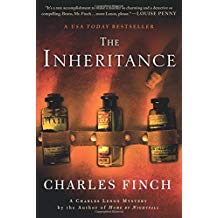 Splendid!  Cracking! and all those other British terms for a jolly good read!  I am not one, in general, for period or historical mysteries, but this book, set in London of 1877 was delightful and delicious.  The main ingredients of a good mystery are characters one really cares about, an engaging setting, and a brilliant, twisting, surprising, and ultimately satisfying plot that grabs you by the lapels in the first 10 pages and refuses to let go.  The Inheritance has all of those elements.  The primary character, Charles Lenox is a former MP, now private detective, graduate of Harrow, married to a peer, and smart, clever, and very likable.  His partners at the agency, Lord Dallington and Polly Buchanan are similarly interesting and attractive.  The story revolves around threats to one of Lenox’s old school chums, Gerald Leigh, once expelled from Harrow but now a prominent scientist who visits London to claim a 25,000 pound inheritance.  Along the way, Leigh is nearly murdered several times, Dallington falls from the roof of the Parliament building, Lenox solves the 40 year old mystery of Leigh’s mysterious benefactor, and Polly and the Lord wed.  You get the idea—fast paced, interweaving plot lines, grand surprises, all stirred up in Victorian England’s atmosphere of horse drawn carriages, cigars and port, and fireplaces for warmth. The advent of electric lighting and a prediction that in 100 years (i.e. 1976) America will outpace England are delightful touches.  We even learn the derivation of the word ‘quiz’.  More Finch down the road, no doubt!

Do I Make Myself Clear?: Why Writing Well Matters, Harold Evans (#2288)
Scroll to top