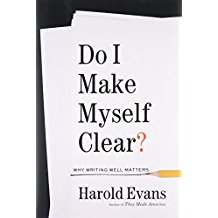 Do I Make Myself Clear:  Why Writing Well Matters, Harold Evans, 2017

Evans is the former editor of The Sunday Times and The Times of London, knighted in 2004, and voted the all time greatest British newspaper editor by his peers in 2001.  So he should know a lot about writing clearly, and he does.  Unfortunately, he feels he has to share every last detail of it with us in this 400 page book which would have benefited from some stern editing.  The book starts well and entertainingly with a chapter on sentences and one entitled Ten Shortcuts to Making Yourself Clear (active, not passive voice; be specific, not abstract; ration adjectives, raze adverbs; cut the fat; organize for clarity; be positive; don’t be a bore; put people first; avoid pesky prepositions.  All of these are useful and bear reading,  but the second half of the book is a long bore as he uses example after example, rewriting and editing terrible examples of unclear writing.  I struggled through it, but don’t recommend that you do so unless you are truly committed to improving your writing.