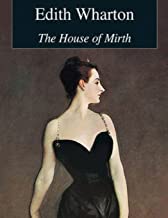 the House of Mirth, Edith Wharton 1905

The House of Mirth was Edith Wharton’s first successful novel and launched her on a course of novels, novellas, short stories, and non-fiction books about design and gardening that culminated in being named the first woman recipient of the Pulitzer Prize for The Age of Innocence in 1920.  Born into New York society and comfortable in its Newport, Long Island, and Berkshire playgrounds, she skewered its members’ vacuous days and superficial, materialistic values in this superb  novel.  Lily Bart is one of literature’s more memorable characters.  Born with great beauty and access to high society, Lily lacked the financial means to be a major player, and as she neared 30, she became more and more convinced that she had to marry into money and position.  The tragic and failed love between Lily and Lawrence Selden, the grotesque pawing of Gus Tremor, the monomaniacal social climbing of Sim Rosedale, and the backstabbing of Bertha Dorset are among the many finely etched characters  created by Wharton.  The book overdoes its repetitive descriptions of the routines and practices of New York society in the late 19th C and bogged down a bit midway through its 320 fine printed pages, but the story picks up steam as Lily falls further and further into desperate straits.  The ending, while not a surprise, strongly moved me.  This book is among Susan Hill’s Final Forty and deserves its place there.  Read it to see a brilliant novelist in action.