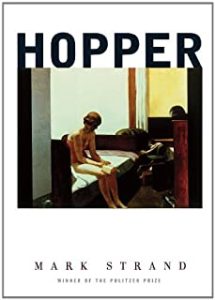 Reading a recent issue of The New Yorker, I came across a review of a show by Edward Hopper, one of my favorite painters,  by Peter Schjeldahl, one of my very favorite cultural critics . Schjeldahl had not actually seen  ‘Edward Hopper: A Fresh Look at Landscape’ a large show at the Beyeler Foundation in Basel which had recently re-opened, but Hopper, ‘the visual bard of solitude’ had been much on his mind during this sheltering in place period.  Schjeldahl’s review led me to pull Strand’s book off my shelf and re-read this fine example of a poet looking at art.  Strand eschewed the art critic’s focus on technique, structure, focus, etc to examine how “Hopper’s paintings transcend the appearance of actuality and locate the viewer in virtual space where the influence and availability of feeling predominate.”  Examining 30 paintings, some well known like Nighthawks, Gas, Dawn in Pennsylvania, Seven A.M., House by the Railroad as well as many unknown to me, Strand a Pulitzer Prize winning poet who died in 2015, observed that Hopper both urges us to stay with the subject and also to move on.  He notes that Hopper gives us no clue as to what happened before and what might happen after the moment captured in the painting.  Strand comes up with what, for me, is the essence of Hopper, noting that the paintings are ‘saturated with suggestion.’  Hopper seems to be the American painter whom I most often encounter—recent exhibits at MOMA and the Whitney, at a play/opera based on four of his paintings we saw in Boston, and in the Rooms by the Sea painting that I first encountered at Yale and then again in a book of poems inspired by works in the Yale Art Museum. This is a fine introduction to Hopper as well as a detailed look at a number of his works and his overall approach.