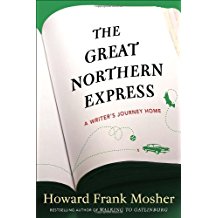 It’s 2008, and 65 year old writer Howard Frank Mosher has just learned that he has prostate cancer serious enough to warrant 47 radiation treatments.  This confrontation with his own mortality leads Mosher to pack up his 20 year old, 200,000+ mile Chevy (The Loser Cruiser) and head out on a 100 city, 150 independent bookstore book tour to tout his latest and 10th novel, Walking to Gatlinburg.  (By the way, Mosher never mentions what book he is pushing on his tour, and I was unable to find out by reading multiple reviews and interviews, but I finally learned the answer by emailing his lovely wife, Phillis, one of the stars of the book.)  Mosher interweaves the adventures on his trek that starts in his beloved Northeast Kingdom town of Orleans and gets all the way to Ferlinghetti’s bookstore in San Francisco before turning back to hit Wyoming, Montana, Iowa, Minnesota, Wisconsin and thus back home with his memories from a life in upstate New York and Orleans, VT.  He is a masterful story-teller, though on occasion, he stretches the truth too far and in a manner that is difficult to separate truth from fiction, e.g. his conversation with Oliver Sacks whom he ‘picks up hitchhiking’ though I’m sure it’s his imagination speaking.  Bottom line is that the book tour chapters offer some funny tales of the life of the touring author and some great suggestions for book store visits in the future, but the real joy of this book are the tales of him and his wife arriving in Orleans newly out of Syracuse and learning how to teach, live in a VT town only miles from the Canadian border, and becoming an accomplished writer.

Fictitious Dishes: An Album of Literature’s Most Memorable Meals, Dinah...

Object Lessons: The Art of the Short Story, eds. Loren and Sadie Stein (#21...
Scroll to top