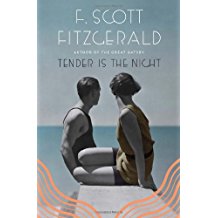 Moving from Hemingway to Fitzgerald is like leaving an austere monastery for the casino at the MGM Grand in Las Vegas.  While Hemingway is curt, brief, sharp, cold and precise, Fitzgerald is gaudy, grandiloquent, and blaringly loud—both are magnificent and incredibly capable in their own styles.  This tale of decadence and blazing destruction on the French Riviera begins and ends in a hotel on the Mediterranean.  The main characters are seen over a period of five years during which Rosemary Hoyt develops from an 18 year old ingénue to a famous movie actress, Dick Diver’s promising career in psychiatry flames out in alcohol and depression, and Nicole Diver moves from schizophrenia to self-assuredness.  Ancillary characters like Abe and Mary North, Tommy Baladan, the Swiss psychiatrist colleague of Diver’s, the Warren family (the incestuous father, sister Baby), and others come and go as the Divers’ marriage fails.  Fitzgerald is the novelist of the ‘failure’ and the predecessor of America’s love of failure, especially the fall of the rich and famous.  This is a beautifully written novel with descriptions that can take your breath away if you give them the time and attention they warrant.   If not, it can seem densely overwritten and overwrought.  I loved it.