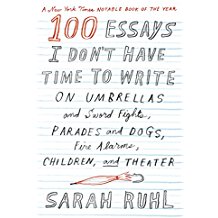 100 Essays I Don’t Have Time to Write:  On Umbrellas, and Sword Fights, Parades and Dogs, Fire Alarms, Children and Theater, Sarah Ruhl, 2014

Ruhl, a Pulitzer Prize finalist in Drama on two occasions, has written a quirky book that would be of great interest to drama fans, but was of only occasional interest to me.  The mother of 3 including twins, Ruhl is a thoughtful and funny observer of the world of parenthood as well as the theater, speculating on all the topics in the subtitle as well as dozens of others.  She writes well and engagingly, but often about minutiae that is of only passing interest to the casual theatergoer.  Made me want to see her plays, however, since I think I’ve only seen Eurydice at the Arsenal Theater in Watertown.