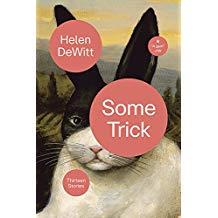 Confession:  I feel guilty because I didn’t like this book because much of the time I was confused, unable to figure out what the author was trying to do, who the characters were, and what they were up to.  I stuck with the book until the end because it had received  laudatory reviews from some of my favorite critics—James Wood in The New Yorker (“tart, brisk, snobbish, antic, surreal”), Adam Kirsch in The Atlantic (“style is unique in contemporary fiction”) and Hermione Hoby in The New York Times (“dazzling, genius”).  So while the experts loved DeWitt and the stories, I struggled through them.  I appreciated the occasional ironic and clever idea, but it dawned on me that in order to really ‘get’ irony and allegory, you have to understand the elements that the author is manipulating—-the characters, their actions, the settings and perhaps most of all, the plot—- and I was often at sea.  This may be one of those examples of ‘aging out’ where my experience and interest in the short story form and its leading practitioners (e.g.Updike, Pritchett, Munro, Hemingway, O’Connor, et al) may be ‘out of date’ and where I’m going to be somewhat at a loss with the new modernism personified by DeWitt.  When James, Eliot, Pound, Stein, and others began writing in new, ‘radical’ forms in the early 1900’s, there was confusion and derision, but they ushered in a century of American Modernism.  It is now time for the new styles, forms, and themes of the this century.  I’ll watch with interest, but will likely stick to my old favorites for my own reading.