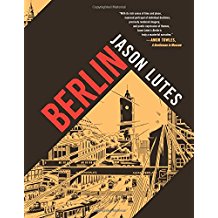 Twenty years in the making, this is a powerful exploration of how the Weimar Republic and the hopes for Germany after the disaster of WWI and the end of the Kaiser’s rule, deteriorated into the Third Reich.  Lutes, a member of the faculty at the Cartoon Study Center in White River Junction, Vermont, takes the reader through 500 pages of fine drawings and gripping dialogue, blending real life individuals with fictional characters to show how the National Social Democrats gradually took power through violence and mayhem and how ordinary citizens of Berlin reacted.  Some like the main character, Carl von Ossietzky who received the Nobel Peace Prize in 1935 while in a Nazi prison resisted with newspaper articles and political organization while others like the unemployed and brutal Otto Braun were drawn to the brown shirts and street violence.  The conflict between the Communists and National Socialists spills into the lives of the Braun’s, a working class German family where the mother flees with her daughters as her husband sinks into Nazi violence and who is shot on the street by the police when they break up a Communist May Day march, the Schwartz’s, a Jewish family who owns an antique store and who flee to America after their home is attacked, homosexual couples like Anne and Marthe who are beaten by the police in a nightclub raid, and others as the German nation lurches towards Fascism.  Hitler is not mentioned until nearly halfway through the book and doesn’t actually appear until the final pages, but his shadow darkens that world from the beginning.  The book concludes with four views of Berlin:  sketches of the bombed out ruins after WWII, the empty streets, barbed wire, and Berlin Wall of East Germany, a hole in the heavily graffitied Berlin Wall, and finally, a contemporary photograph of a vibrant and busy modern Berlin.  Lutes has created a powerful and moving work that holds important lessons for our time.