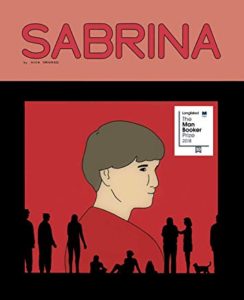 I was drawn to this graphic novel by a review in The New Yorker in January by D.T. Max, the biographer of David Foster Wallace. In addition, Sabrina was the first graphic novel long listed for the Booker Prize.  But I was disappointed and disturbed by the book.  Sabrina is the name of a woman living in Chicago.  We meet her briefly in the first few panels and learn that she has a sister, a mother, a job, and a boy friend named Freddie.  Then she disappears, from both the panels and from the world.  We learn over the course of the book that she has been kidnapped and brutally murdered, an act that was captured on video tape and sent to dozens of news outlets.  The murderer, a mild mannered neighbor, commits suicide so we never learn his reasons for this horrible act.  Instead we are exposed to the dark internet’s conspiracy lunatics who relentlessly harass Sabrina’s family, boyfriend, and the latter’s childhood friend in Colorado who takes him in. The whole book is upsetting, disorienting, and ultimately a bad trip.  With the Booker listing and the New Yorker profile, Drnaso is clearly an important contemporary author, but perhaps too contemporary for this septuagenarian reader.

A Far Rockaway of the Heart, Lawrence Ferlinghetti (#2403)
Scroll to top