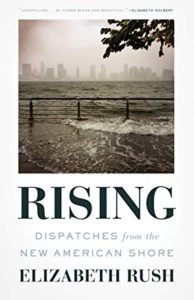 Rush, a journalist who teaches at Brown, has written a sobering and informative book about the perils of rising sea levels.  The impact of global warming to average temperatures not seen in 3 million years is leading to the melting of the polar icecaps and Greenland as well as the warming of the oceans.  The resultant rise in sea levels threatens to inundate millions of acres of shoreline in the U.S. by mid-century, but continues to be denied by the trump administration.  Using classic journalistic techniques of going to the place and talking to the people who are most affected, Rush tells the stories of people in Louisiana, Florida, Rhode Island, and New York who have already been displaced by the flooding and damage done by the ever more encroaching salt water.  In addition, she does an excellent job of interviewing the scientists who are engaged in addressing this crisis with facts, experiments, and action.  She doesn’t spend much time on the science of global warming, assuming that everyone other than trump and his Republican allies in the fossil fuel industry already know what’s happening. What she does with a laser-like focus is indicate how the ‘damp fringes’ threaten all of us. The rise of sea level destroys the wetlands and marshes that provide the buffer to protect the upland areas, and they are squeezed between the rising salt water and the roads, homes, and infrastructure that increasingly have encroached on the flood zones, supported by flood insurance, greedy developers, and municipal governments more interested in property tax gains than in safety and sustainability.  She makes the strong case for ‘an organized retreat’ from these boundary areas noting that if we fail to do so in an organized and planful way, the destruction and dislocation will be overwhelming.  The connections that she makes from the personal stories of individuals to the science to the potential solutions are clear and effective, and her viewpoint effectively alternates from the objective essayist to the passionate, lyrical storyteller.  Rush points out another important element of this oncoming disaster which at least partially explains America’s willingness to ignore reality.  The ones most seriously affected by sea level rise are the poor and the disenfranchised.  They are the ones that cannot afford flood insurance or rebuild their homes on stilts or move to another place.  Once again, the American politics of the rich and the poor result in a crisis of social justice as well as the environment.   This is a fine book and made it clear to me for the first time that Miami, Staten Island, and nearly all of the American coastline from Maine to Washington is in serious trouble and will likely be underwater not long after I will be underground.  It’s an important book to read, though the folks that withdrew us from the Paris Accord are unlikely to do so, and the ticking clock of environmental disaster is moving ever faster.  Sobering!

I’d Rather be Reading: A Library of Art for Book Lovers, Guinevere De...