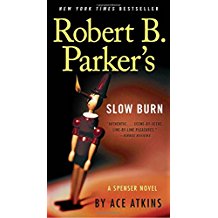 Atkins is slowly winning me over in this his fifth Spenser book, as he masters the clever repartee between Spenser and Susan Silverman and between them and Hawk.  Z, the full-blooded Cree Indian, in training to become the next Spenser is also there as is Henry Cimoli and his gym.  The whole cast along with Quirk, Belson, and the new Captain, a woman named Glass, team with Arson investigators to catch Mr. Firebug whose work has killed three BFD members and injured others.  A swiftly moving story set in Cambridge and Boston and a good vacation book.