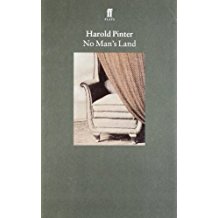 Another one of Pinter’s minimalist plays with starkly drawn characters who appear to emerge fully developed and engaged in the middle of some activity that remains mysterious and unknowable to the audience for quite a while.  In this case, Spooner, who appears to be a waiter at a Hampden Heath pub or the editor of a poetry review or both, is in the home of Hirst, who is apparently a famous author/poet who lives in a large home on the Heath and is attended to by two retainers, Foster and Briggs.  Alcohol flows, profanity spouts, and by play’s end it’s not clear who has done what to whom or for what reason.  The play ends with a discussion of Hirst’s dream in which Hirst says “Let’s change the subject for the last time.” which leads to the final lines from Spooner in response to Hirst’s description of his dream, “No. You are in no man’s land.  Which never moves, which never changes, which never grows older, but which remains forever, icy and silent.” On that Pinteresque happy note, the curtain falls.  The play has recently been given a revival by London’s National Theater, starring Ian McKellan and Patrick Stewart to much acclaim.   I think it’s a play about man’s isolation, alienation, and hopelessness and our inability to communicate in effective ways with each other making our ability to help each other nil.  Happy days, Harold!