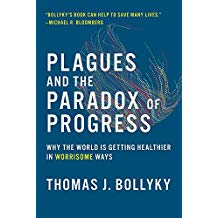 Plagues and the Paradox of Progress, Thomas Bollyky 2018

Bollyky, the Director of the Global Health Program at the Council on Foreign Relations and a Professor of Law at Georgetown University, has written an excellent, thought-provoking book about the paradox of improving global health and the resultant potential disasters in population, migration, and chronic disease.  In language that is understandable to the lay reader and with the judicious use of graphs and statistics, he makes a compelling argument that the enormous strides made in infant and childhood mortality and in life expectancy in both the wealthy and poor nations around the world have created a demographic time bomb.  The large populations of young adults that are the result of these improvements in infectious disease management in the last 20-30  years are  now swelling the mega-cities of Africa, South Asia, and Latin America.  The  marked reduction in infant and childhood deaths from vaccine preventable diseases (primarily smallpox, measles, and polio), oral rehydration treatment of diarrheal diseases, and the ‘vertical’ approach of international aid to eliminate or ameliorate specific diseases (e.g. HIV-AIDS), have resulted in a ‘demographic bulge’ entering a world where there are no longer manufacturing jobs or agricultural opportunities.  The resulting mega-cities with their overcrowding, inadequate sanitation and water supplies, and rudimentary public health and primary care systems are creating a time-bomb of unrest and chronic illness.  When combined with the climate change and the developed world’s reactionary turn away from open trade and immigration, the consequences for the world may be catastrophic with civil unrest and wars the result.   One of Bollyky’s key observations is that the improvements in childhood deaths and life expectancy in the developed world occurred over many decades and at a time when manufacturing and emigration were growing.  In contrast, today’s developing world has experienced these improvements in infectious disease control over a much briefer time period and at a time in history when manufacturing, immigration, trade, and climate are all negative factors.  The result is nations like Bangladesh which is growing at an incredible pace without the public health system, primary care system, and economy to mange the population.  The capitol, Dhaka, is one of 13 mega-cities (population greater than 10 million) defined by the UN as low income where most of the inhabitants live in slums without sanitation, water, or services.   In the final chapter, the author suggests steps to address these synergistic problems, but the reader, though better informed, is left with a sense of impending doom.  This is an important book for both the public health and policy expert as well as the general reader.