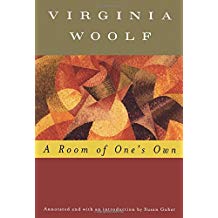 This six chapter essay was based on presentations that Woolf made to the Arts Society at Newnham and the Odtaa (a popular expression in Victorian times meaning ‘one damn thing after another’ that was used to name social clubs) at Girton on the topic of women and fiction which she had been asked to address.  She begins by pointing out that she never would have chosen this topic and then launches into a series hypothetical sketches of women writers from the 16th Century (Shakespeare’s sister) through the early 20th.  The impossibility of a woman being able to write anything meaningful before Woolf’s own time is clearly argued based on the social, economical, educational, and religious barriers that had been erected by the paternalistic English society prior to the late 19th C. The take home message that people remember from the book is that a woman needs a room of her own (that can be locked and is quiet and private) and 500 pounds/year income in order to provide the circumstances that enable clear thinking and writing.  Woolf builds that case in the following way:  great writers write not from anger or  passion but from a clear mind and building upon the contributions of others; women have been given second or third class status all through history and not allowed to participate in the world of the mind; men, having had their status threatened by late 19th C and early 20th C women’s ability to own property and vote, have angrily responded with increasingly strident claims of female inferiority; women bring a different sensitivity and sensibility to the questions of life, and the successful authors are manly-women or womanly-men who combine the best of both sexes’ insights and senses.  Woolf is ironic, sarcastic, and extremely funny. She turns some memorable phrases in this brilliant, cutting, and very contemporary feeling essay.  The reaction of Edwardian England to women is so very reminiscent of the reaction of much of today’s America to the feminist and #meToo movements and to the increasingly important role of women in today’s world.  The world changes and improves but stays much too much the same.  This essay is worth reading, not only for Woolf’s superb language and style but because the message is still important.

Plagues and the Paradox of Progress, Thomas J. Bollyky (#2316)
Scroll to top