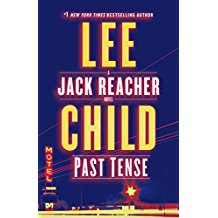 One distinguishing characteristic of the mystery/thriller genre is the annual release of the ‘new book’.  Some writers can successfully maintain quality of voice, character, plot, and setting over 15, 20, or even 25 years.  One such author was Georges Simenon whose Inspector Maigret solved murders in Paris and all over France in more than 75 books over the 40 years between 1931 and 1972. On the other hand, some writers can’t keep it going, as  the late Sue Grafton whose alphabet mysteries began to fade somewhere around R or S but who continued to turn out the annual ‘letter’ through her death after Y.  Lee Child’s new book raises the question of which direction he will follow in the coming years.  In Past Tense, Child’s 24th  Jack Reacher book, there are mixed signs but this book is definitely different from its predecessors in several key ways.  First, Reacher doesn’t kill anyone until the final pages of the book and doesn’t even maim anyone until page 90. Second, he doesn’t sleep with the primary female character. On the other hand, as in most of is books, the plot is totally far-fetched.  Jack decides to trace his family roots when he finds himself near Laconia, NH, but his efforts at geneology seem extreme even for the weird Reacher.  Things get so out of control that at one point he is being hunted by an angry and violent group of apple farmers, a group of five enforcers from the Boston mob, and the nine crazies who show up at an isolated motel to do some hunting.  The book spends way too much time with Reacher hypothesizing what other characters will do, and SURPRISE, he’s always right!  What Child does succeed in doing was to make this reader way too tense, probably the tensest I’ve been with a book since the shower scene in Psycho.  If that’s your thing, read Past Tense.  If not, give it a pass and hope that Child’s next book is better.  On the other hand, Marilyn Stasio listed Past Tense on her Best Crime Fiction of 2018 in the December 23rd New York Times Book Review and Ian Rankin mentioned that it was on ‘his nightstand’ in the By the Book column in that issue, so as my Nanny Belle used to say: That’s why there’s chocolate and vanilla.