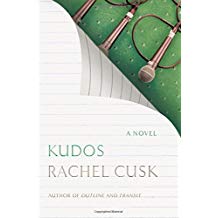 This is the third novel in Cusk’s trilogy that began with Transit and continued with Outline, named one of the New York Times’ Best Books of 2015.  I’ve read the latter but not Transit, though now I plan to.  Cusk writes in a distinctive style—no chapters, page long paragraphs which present to the reader as a solid wall of prose, and almost no dialogue.  Narrated in the first person by the main character, we learn almost nothing about her or what brought her to the present moment.  She is divorced, has at least one son, is named Faye, lives in London, and is attending a writers’ conference in a seaside city where it is terribly hot and staying in a hotel which is not very attractive.  Within this context, there is no essentially action until the very last pages as Faye encounters multiple individuals who tell her their life story with seemingly no encouragement or prompting from her—-the Englishman sitting next to her on the plane, fellow writers at the conference, interviewers from newspapers and TV, various individuals who guide her from interview to panel to interview.  In each case, those she encounters engage in a long monologue about their life—divorce, children, the work of writing, colleagues, etc.  The stories begin to blur as Cusk delivers the message that life consists of creating a narrative about the events you experience, either a ‘our family is perfect and life couldn’t be better’ or ‘my life is a disaster and listen to all the terrible things I’ve experienced.”  The sense that all humans create ‘fictions’ to explain their lives is the over-riding message.  Nobody seems to be truly happy doing what they’re doing and there’s a sense that “some knowledge was being withheld from me whose revelation would make everything clear.”  Not very upbeat, but some beautiful writing.