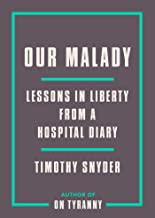 Our Malady: Lessons in Liberty From a Hospital Diary by Timothy Snyder 2020

Snyder, the Levin Professor of History at Yale, has written 15 books most recently about the dangers to American democracy posed by the Trump administration’s disregard for truth, law, and democratic norms.  This book continues with that theme but from a very different vantage point.

The book focuses on the American health non-system and how its focus on commercial profit represents a major threat to our freedom.  Snyder writes from the intimate knowledge of someone who has seen and experienced this system up close and personal having nearly died after his burst appendix led to a liver abscess which was missed on at least two hospitalizations before it resulted in septicemia and a near death experience.

He honestly admits that he writes from rage, a deep and sustained anger at how American medicine and corporate healthcare nearly killed him and is steadily eroding our freedom by neglecting our health.  He quotes the familiar statement that we spend more than twice what other countries do on health and yet die earlier.  It is this deprivation of years of life and the imbalance in how we spend our resources (i.e. neglecting child care, family leave, retirement savings, sick leave, etc by over spending on drugs and unnecessary high-tech, expensive care) that is the threat to our freedom.

He doesn’t hold back in his damning of trump and the impact his self-serving lies early in the COVID pandemic eventually had on American deaths.  Writing sometime in late 2020, he refers to 150,000 US deaths, the highest rate of fatalities in the world in the world’s richest nation, but far fewer than this week’s information that we had passed the  600,000th deaths mark.  But his major criticism is directed at what he calls ‘commercial medicine’ where doctors are sidelined from authority and the only goal is profitability.

His solution is to invest in public health and in our children and to put health care back in the hands of the doctors.  These ideas, while valuable, struck me as naive.  Many doctors are driven by profit as are the corporate CEO’s, and putting them ‘in charge’ is unlikely to rein in health care costs or even rationalize care. (Think of the radiologists who own imaging centers or the surgeons who own surgi-centers and you get some idea of commercial healthcare in the hands of doctors.)  He gives only passing mention to the primary cost control mechanism, single payer, and his goals for public health and child care improvements, while valid, are unlikely to be achievable in this political environment.

In summary, this is a good, though not a great book.  It suffers as do many books written by dying authors (e.g. Christopher Hitchens and Oliver Sacks) from being written mostly from the heart and not from the head.  Its concerns and criticisms are valid, but its solutions fall far short.  Worth reading, however, for its blunt evaluation of trump’s failures.