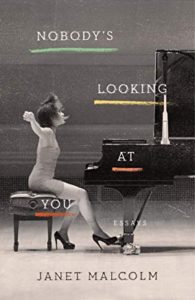 I think Janet Malcolm is one of the most erudite, clever, insightful, and literary of our modern critics.  I’ve read five of her books, from her description of the moral indefensibility of the journalist in the “Journalist and the Murderer” about Joe McGinnis’s book dealing with the 1970 murders that Dr. Jeffrey McDonald was accused and convicted of to her most recent book of essays entitled “Forty One False Starts: Essays about Artists and Writer”.  I’ve always enjoyed the investigative thoroughness and the fine writing that characterizes her work.  But, I was somewhat disappointed in this volume of essays.  Some were quite wonderful including the ones about individuals:  Eileen Fisher (whose Catholic mother always and in retrospect ironically admonished her that “Nobody is looking at you.”), the Chinese piano phenom Yuja Wang, the fascinating three daughters of Louis Cohen who run the Argosy Bookstore in Manhattan, George Jellinek whose radio program, the Vocal Scene, ran for years, and her terrific portrait of Rachel Maddow.  On the other hand, the second part section of the book comprising essays dealing with politics (Supreme Court hearings, Sarah Palin) and a few from the late ’90’s (especially ones on email and sexual harassment) felt outdated and a bit naive.  The book lacked an introduction explaining why these particular pieces were included in one volume other than to describe them as ‘previously uncompiled’, but that doesn’t seem like an adequate reason for this group of essays to be re-published since all had appeared in The New Yorker or the New York Review of Books.  Malcolm remains a favorite essayist, but I think that I’ll just read her in the magazines in the future.  (Ironic that the previous book that I read is entitled Look at Me!).