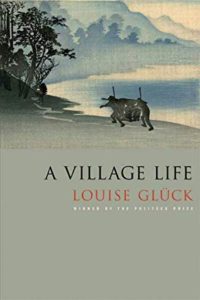 Gluck, who lives here in Cambridge and teaches at Yale, is a Pulitzer Prize winning poet, so it seemed appropriate to read one of her books during National Poetry Month.  I chose her 11th volume simply because it was available on the Cambridge Public Library shelf and because I had the notion that it would be sited in a Vermont village, the state where she did much of her earlier writing.  In fact, I believe that the village is probably in southern France or Italy, though we are never told.  Instead, Gluck offers her mixture of joy and sadness as she describes individuals in all stages of life, but particularly the children as they leave innocence and enter adolescence and the oldest villagers as their time draws to a close.  Behind all these human cycles is the eternal and beautiful cycle of the seasons and the over-riding presence of nature.  In two poems, both titled Burning Leaves, the burning of leaves at the curb that I remember vividly from my childhood is used as the metaphor for change, “So it’s finished for another year,/death making room for life, as much as possible, but burning the house would be too much room.”  She’s especially good about the changes as one grows older:  “On nights like this, she’ll walk as far as the bridge/before she turns back./Everything still smells of summer./And her body begins to seem again the body she had as a young woman,/glistening under the light summer clothing.”  These are not rhyming, regular stanzaed poems, but rather more like prose poems and free verse. What they truly are, however, are beautiful.  Leafing back through the pages for this review, I was reminded how poetry has the ability to move a mundane action (e.g. burning leaves) and make it a powerful symbol and message about life.  Well worth reading.

All the Lives We Ever Lived: Seeking Solace in Virginia Woolf, Katharine Smyth...
Scroll to top