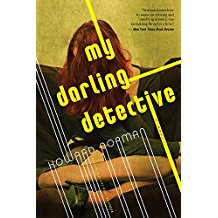 Norman, a resident of E. Calais, VT, has written a clever and engaging detective novel, combining the best of Marlowe’s noir with the modern rapid fire, clever dialogue of Robert B. Parker, Harold Coben, and others.  The story takes place in Halifax, Nova Scotia, a site that Norman knows well from his days living there as a young man.  The novel begins with a criminal act when the narrator’s mother, Nora Ives Rigolet interrupts the auction of a Robert Capa photograph by throwing ink at the work.  Her arrest and interrogation by her ‘interlocutrix’, Martha Crauchet, the narrator’s fiancé, takes the reader off into new places and past times.  A cold case surfaces with the introduction of Robert Emil, a former Halifax policeman, who was a suspect in the murder of two of Halifax’s leading Jewish citizens back in 1945.  These murders and the death of Jacob’s putative father in WWII Leipzig, form the core of the book’s story.  The noir segments, very well written in the style of The Big Sleep, are introduced via a radio show entitled Detective Levy Detects, which Martha and Jacob listen to every week.  You get the idea—humor, suspense, a clever puzzle based on extensive detailed dates, and the life story of some of the members of the Greatest Generation.  A fine work by a fascinating author.