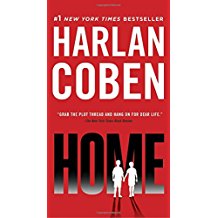 I decided to skip to the most recent Bolitar/Lockwood detection story, leaping over the middle six or seven.  In the process, I lost Jessica, missed how Myron met Terese, missed why Win disappeared for a  year, missed the vanishing of MBSportsRep along with Esperanza and Big Cyndi, but boy oh boy, I did get a rip roaring good story whose 385 pages I whipped through in 24 hours!  This story, like the others, is a bit silly, but it moved along swiftly with great dialogue and a full cast of bad guys, led by Fat Ghandi the Oxford educated pedophile and hi-tech gangster.  Too hard to retell this tale, but let it suffice that it is built around the disappearance 10 years earlier of two six year old boys, one of whom was Win’s cousin’s son.  Win and Myron are fully in for finding Rhys.  They don’t but they do resolve the mystery.  New slant is that Win narrates some of this story.  Fine series.