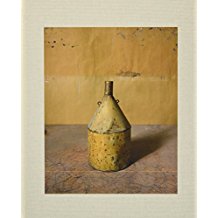 A world class photographer takes photographs of single, plain objects such as a tea tin, an oil can, a glass vase on a table top covered with black tracings and in front of a torn and stained yellow paper backdrop. What possible interest can they hold? Turns out, enormous since they are from the studio of Giorgio Morandi (1890-1964), a Bologna-based artist whose still lives (natura morta) using those objects are among the 20th C.’s greatest paintings. We first encountered Morandi at an exhibit at the Met in 2008 and then again at the Centre for Italian Art in 2015 where 40 of his paintings were exhibited. Meyerowitz was given full access to his studio in Bologna and took his photographs of 66 of the 260 objects that were in the studio. Those 66 photographs plus a photo of the actual bedroom/studio are accompanied by essays by Meyerowitz and his wife, Maggie Barrett. It’s a lovely book, but pales in comparison to the actual oil paintings’ subtle manipulation of hue, color, tone, shadow, and shape. Love that Morandi!