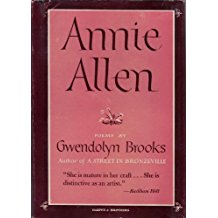 Perhaps the most eye-opening and mind-expanding read of the year, this was the book that earned Brooks the Pulitzer Prize, the first awarded to an African-American writer launching her into the role of first African American Poet Laureate of the US in 1985. Books was born in Topeka in 1917 but raised and lived in Chicago until her death in 2000, and is widely admired as the voice of Black awareness and political action beginning in the 1960’s. Her poetry is not easy, filled as it is with classical allusions and contemporary dialect and idioms, but it richly rewards the reader. This volume, heavily rhymed with classical forms, left me with a deeper understanding of my oft-stated view that ‘every person is waging a great battle’. Brooks’ poem entitled ‘the children of the poor’ is a heart-breaking story of the Black parents’ passionate hopes for their children, doomed to the destruction of poverty and discrimination. The poem “Beverly Hills, Chicago” about the gap between rich and poor ends “We do not want them to have less./But it is only natural that we should think we have not enough./ We drive on, we drive on./When we speak to each other our voices are a little gruff.”   Classic Brooks: understated, direct, hard-hitting. I came to this book via April Ossmann’s (see above #2188) in which she dedicated two poems to Brooks stating that they were in the style of the Golden Shovel. That led me to learn that Brooks’ poem Seven at the Golden Shovel had been adapted by Lawrance Hayes in a new form where he took the words of Brooks’ poem and made each word the final word in a line of his new poem. This technique has caught fire and a recent volume on the occasion of Brooks’ centenary has been published in which dozens of poets, both famous (Collins, Kumin, Olds, Mazur, and others) and unknown wrote poems in the Golden Shovel style using Brooks’ poems as the source of the final words. A final thought: in reading about Brooks, I browsed the Modern Critical View on Brooks. This series edited by Harold Bloom includes more than 100 volumes on major writers. I was struck by Bloom’s introduction in which he stated: “My introduction concerns itself with a few of the earlier, pre-1967 poems of Gwendolyn Brooks, since her work since 1967 is of a kind that I am not yet competent to judge.” Bloom, whose erudition and self-promotion know no limit, is expressing with this subtly vicious swipe at Brooks’ Black activist and Black-power poetry, that it doesn’t merit is scholarly attention and effort. Hard to criticize him, since until this year, Brooks had been unknown to me. No wonder her work seethes with anger and frustration. No wonder we have Trump for a President. We should all read Brooks!