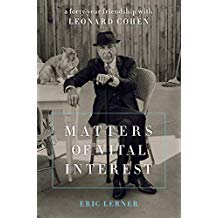 Lerner, a 71 year old screenwriter and novelist, has written a quirky and engaging story about his 40 year friendship with Leonard Cohen, the legendary poet, songwriter, and performer who died two years ago after a long struggle with myeloproliferative disorder.  The book begins with the serendipitous meeting between the two when Lerner was a 20 something year old college dropout attending a Zen meditation retreat in California, and Cohen was one of the acolytes there.  Despite a 15 year difference in their ages, something clicked, and they became life long friends.  They addressed each other as Old Eric and Old Leonard as they talked on the phone, emailed, and spent time together at their Los Angeles house, Tremaine, that they bought together in the late 70’s.  They lived through marriages, divorces, fatherhood, career ups and downs, and Cohen’s late success, and all the while they talked about ‘matters of vital interest’ trying to “make ourselves clear to each other, clearer than we did to anyone else.  We shared a subversive feeling about human life….To while away our indefinite sentences we concocted an imaginary jigsaw puzzle… The puzzle came in a plain white box, but it wasn’t one of those all-white, pictureless puzzles.  It was up to us to get the picture.  We puzzled over it for forty years, hoping that one day before we were dead, we could step back and the whole picture would be clear to us at last.  That was our mad hope, the only one we ever held.  If we ever solved the puzzle, it might make things a little easier.”   The book jumps back and forth from the 1970’s to the 2000’s in an occasionally maddening way, but overall this is a beautiful tale of a special friendship and bond.  It might have been between any two sensitive, observant, cerebral, and loving men, but the fact that it was between two artists, one of whom is world-famous, gives it even more impact.  A book well-worth reading for fans of Cohen and for men trying to figure out whether it’s easier to figure things out on one’s own or with a friend.

I’d Rather Be Reading: The Delights and Dilemmas of the Reading Life,...
Scroll to top