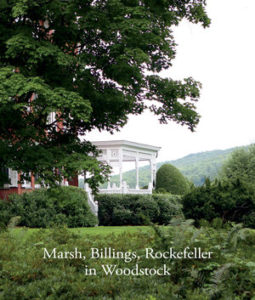 Our 1830’s farmhouse on a dirt road at the foot of Mt Ascutney in Brownsville, Vermont is only 16 miles from the town green in Woodstock, a beautiful New England village. The beauty of Woodstock is largely due to three men, their families, and their commitment to conservation and preservation.  George Perkins Marsh (1801-1882) grew up in Woodstock, attended Dartmouth, and wrote the book that is credited with beginning the conservation and environmental movement in America, Man and Nature.  A diplomat and a scholar, Marsh sold his home, farm, and library to Frederick Billings (1823-1890) in 1869. Billings was a successful lawyer who was born in nearby South Royalton and attended UVM before making his fortune in San Francisco as a railroad attorney.  He returned to Woodstock where he spent the last 21 years of his life putting into practice the environmental principles that Marsh had described.  He imported a herd of Jersey cows, planted innumerable trees, and created carriage roads throughout the property abutting Mt. Tom.  When Billings died, his property remained in the family and the other chidren’s shares were eventually bought by Mary French Rockefeller, his granddaughter in 1954.  She had married Laurence Rockefeller in 1934, a man committed to nature, beauty, and the preservation of wilderness for us by the American people.  Under their guidance, the farm and the mansion were updated, further developed, and ultimately gifted to the National Park Service in 1992.  Today, Billings Farm and the Rockefeller mansion are major tourist attractions and educational institutions.  Suokko tells this story in an engaging style and enriched my already fairly deep knowledge of this story (We are longtime members of Billings Farm and our younger daughter was married there three years ago!).  Suokko’s prose is accompanied by beautiful photographs. The chapter on the Billings’ and Rockefeller’s art collection was particularly interesting.  The Billings were major collectors of the Hudson River School landscape artists including Bierstadt, Cole, Church, and Kensett, and these beautiful paintings remain in their original places in the mansion, available to the public for viewing.  There are no paintings that had belonged to George Perkins Marsh because he donated his art collection to the Smithsonian when it was founded and it remains there.  This is a beautiful book with a compelling story of how individuals can improve the world, how legacies can be maintained, and how generosity can enrich the lives of both the givers and the receivers.  Well worth reading and returning to the beautiful photographs again and again.