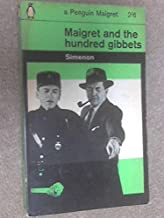 Simenon launched Jules Maigret, Chief Inspector of the Paris Flying Squad in 1931 with no fewer than 10 books, of which this one is listed as the fourth in the Wikipedia entry.  I had no idea what a gibbet was when I began to read the book, and it was never explained so I had to look it up. A gibbet is a gallows, and the reference in the title is to a character in the book who repeatedly painted gallows with various victims.  The book itself is a bit strange. First it doesn’t take place in Paris at all.  Second, the story is a bit of a stretch as follows:  Maigret has been in Belgium on business and is in a cafe having a drink when he sees a pale, nervous man wrapping up thousand franc notes in a paper envelope.  His curiosity piqued, Maigret follows the man and eventually sees him shoot himself in an adjoining hotel room in Bremen, Germany where Maigret has followed him.  Unable to let go of his guilt and worry about his role in the suicide, Maigret does his usual ‘dog with a bone’ tenacious investigation and discovers a 20 year old crime and the group of now middle aged men who were involved in it.  Not one of his best but an engaging read, nonetheless.