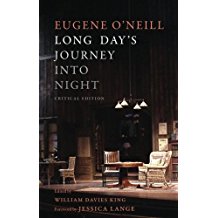 Read in preparation for the performance at The Weston Playhouse, this is an extraordinarily powerful drama about the Tyrone family.  A closely autobiographical play, O’Neill wrote this as a ‘gift’ for his wife on their 12th anniversary but then put it away so as not to damage those still living.  His wife published it 14 years later.  O’Neill won four Pulitzer Prizes and was the Nobel Prize in Literature winner in 1936, years before Iceman and Long Days Journey were published.  In this play, the action takes place in a single day at the family’s summer home on the Long Island shore.  James Tyrone, a promising actor who gave up his art to play the Count of Monte Cristo over and over again for money, Mary Tyrone, morphine addicted and mentally unstable, the older son Jamie, an alcoholic, whoring bum, and Edmund, the young tubercular poet spend the four acts tearing away layer after layer of dissemblance and hurting each other more and more.  The only hope in this family is for Edmund to get out, as did O’Neill.  Violently emotional and disturbing, the play, both read and acted, is a powerful example of how the stage can be as serious a vehicle as poetry and literature for exploring and demonstrating the human condition.

Ruined by Reading: A Life in Books, Lynn Sharon Schwartz (#2175)

Fictitious Dishes: An Album of Literature’s Most Memorable Meals, Dinah...
Scroll to top