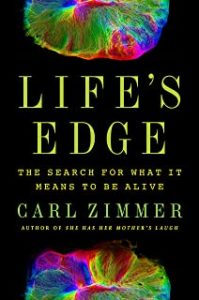 Life’s Edge: The Search for What it Means to Be Alive by Carl Zimmer 2021

This is a fascinating book by the New York Times science writer Carl Zimmer in which he meticulously and engagingly takes the reader through centuries of scientific struggle with the definition of ‘life’.

Beginning with the modern day controversy about abortion (when does life begin? the ovum, the zygote, the embryo, the fetus of 25 weeks?) and the historical as well as modern day efforts to decide when someone is dead, he takes on interesting journeys with modern scientists from Antarctica (where a 4.5 billion year old piece of Mars may contain ancient fossils) to the sea floor (where boiling water and chemicals spew from the earth’s core and living microbes might originate), from a moon of Saturn where an ancient ocean churns far below the frozen surface to  a laboratory in San Diego which tries to replicate those conditions, and from labs where robots create ‘oil drops’ to see how they might self-assemble into larger molecules to labs where electric currents are passed through chemicals to determine if proteins or DNA might come into being.

Because Zimmer has an eye for the interesting detail and the fascinating individual and since he doesn’t get lost in the weeds, this makes for a terrific read, almost like a ‘who done it’ mystery as the book moves towards a conclusion.  The bottom line is that we can’t yet define life, though like pornography, we know it when we see it.  In fact, the human brain is pretty good at the ‘live/no live’ test.  Concepts like ‘information processing,’ auto-catalysis,  and self-assembly may turn out to be critical in determining what life is, but in the meantime, science proceeds and scientists work.

This is a terrific book for both the scientist and lay-person.

Nobody Runs Forever by Richard Stark (#2674)