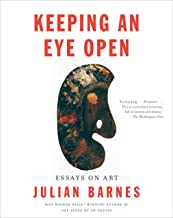 Barnes, the author of 20 books and winner of the Booker Prize among many other honors, has succumbed to the common temptation among superb writers and written a book of art criticism.  The question of the ability to translate a painting into words is one of the themes debated throughout this wonderful collection of 20 essays about artists, both famous (Degas, Cezanne, Manet, Bonnard) and less well known (from the mid-19th C. French masters Vuillard, Redon, and Vallaton to the best British artists of the 20th C, Freud and Hodgkin).  Barnes weighs into the debate expressed by Flaubert (clearly his hero and muse) who wrote ‘Explaining one artistic form by means of another is a monstrosity.” and Henry James who said “Painters have a great distrust of those who write about picture.” His answer, as evidenced by these superb essays, is to write with great skill, feeling, and compassion about both the art and the man (for, alas, the artists are all men!).  Barnes also debates the question of the importance of whether it is important or even relevant to know about the artist’s life to appreciate the works. Flaubert, again, famously said that he had no biography.  Barnes again disagrees, writing about the details of the artists’ lives, loves, and philosophy of painting and stating “Biography infects pictures”.  I loved his references to some of my favorite writers and pursuits with his shout out to Simenon’s Maigret novels, the New Yorker’s caveman cartoons (the ‘Lescaux group’ of artists!), John Waters’ Baltimore home filled with fake food art, Martin Gayford’s wonderful book The Man with the Blue Scarf, and Lorrie Moore’s quote that justifies my habit of peering intently at the faces of passing people on the street and subway: “the face is the heart’s great canvas”.  In addition, this is the first book in a while that made me keep a list of words to look up from the esoteric (ephebe: adolescent male in ancient Greek and chrestomathy: collection of writings of an author used to learn a language) to one’s I’ve looked up a dozen times but can’t recall (otiose: serving no practical purpose).  I especially enjoyed the final two chapters about Lucian Freud and Harold Hodgkin, who along with David Hockney are Britain’s greatest painters of the last generation.  This is a wonderful book to read, though I wish there had been more photographs of the paintings he refers to.

Something I’ve Been Meaning to Tell You, Alice Munro (#2521)
Scroll to top