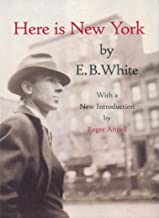 E.B. White had been a staff writer for The New Yorker for 24 years when Holiday magazine asked him to write a long essay about New York City.  We learn about this as well as other interesting facts about the man and the city in a brief introduction to the reissue of this 1949 book on the fiftieth anniversary of its publication.  The introduction was written by Roger Angell, White’s step-son and another long time New Yorker staff writer who continues to turn out essays in his 99th year.  White’s essay is a love letter to his adopted city, though his heart always remained in his beloved Brooklin, Maine.  White writes about New York’s unique ability to ‘bestow the gift of loneliness and the gift of privacy“.  He describes three populations in this city of 8 million—the natives, born, raised and continuously living there; the commuters flocking in from their suburban homes in the morning and leaving at the end of the day oblivious to the gifts and glories of the city; and the settlers, those who have come to seek their fortune and pursue their dreams.  As many have said since then, White writes that “New Yorkers temperamentally do not crave comfort and convenience—if they did they would live elsewhere.”   In an eerie forecast of what was to come, he makes the observation that ‘the city, for the first time in its long history is destructible.”  Writing only four years after Hiroshima and as the United Nations building was rising on the East River, White foresaw New York’s vulnerability to ‘a single flight of planes no bigger than a wedge of geese (that) can quickly end this island fantasy, burn the towers, crumble the bridges, turn the underground passages into lethal chambers, cremate the millions.”  The experience of 9/11 provided a close simulacrum to his prediction.  He concludes his paean with the observation that ‘The city at last perfectly illustrates both the universal dilemma and the general solution, this riddle in steel and stone is at once the perfect target and the perfect demonstration of nonviolence, of racial brotherhood, this lofty target scraping the skies and meeting the destroying planes halfway, home of all people and all nations, capital of everything, housing the deliberations by which the planes are to be stayed and their errand forestalled.”  In the 70+ years since he wrote that the balance seems to be tipping towards the violent and away from the deliberative. White is a superb writer who is the White in  ‘Strunk and White’ which has been a guide to generations of writers.  Similarly, his ‘Charlotte’s Web’, ‘Stuart Little’, and ‘Trumpet of the Swan’ have delighted decades of children.  This snapshot of America’s greatest city from nearly 75 years ago is worth reading to see how little has changed despite landing on the moon, the assassination of a President, wars in VietNam, Afghanistan, and Iraq, and the election of a failed businessman and reality TV flop.