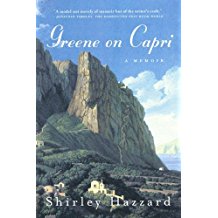 Hazzard, the winner of a National Book Award for her novel The Great Fire, has written a charming memoir about the English author Graham Greene (b. 10/02/04–d. 4/3/91) based on their time together over many years on Capri where both of them had homes.  They initially met at a café on Capri where Greene was quoting a poem by Robert Browning to a friend and couldn’t remember the final line.  Hazzard, 27 years his junior, overhearing the conversation at the next table, supplied the line, and a lifelong friendship was begun.  As she states in the final chapter explaining the work, “I hope that there is room for the remembrance of somebody who knew him—not wisely, perhaps, but fairly well—on an island that was ‘not his kind of place’, but where he came season after season, year after year; and where he, too, will be subsumed into the capacious story.  These recollections are bound up with the glimpses of that place, and with memories of its men and women; above all, with images of two tall men sitting at ease in the café, as years pass, talking of the great writers: living impressions that may stay vivid into the Millenium—or so very little longer.”  That paragraph summarizes why I loved this book—extra-ordinarily excellent writing, literary allusions galore, and all tied up with a wonderful period of English literature and a beautiful place (Capri where the English writers’ colony was vigorous before WWII, where Gorky lived and Lenin visited, where Emperor Tiberius lived his final decade and where a short boat ride brought one to Ischia where Auden lived, to the Galli Isles where Picasso, Cocteau, and Massine built a studio, and Positano) .  And as Hazzard had ventured, Greene, Harold Acton, Norman Douglas, and her husband Francis Steegmuller are now largely forgotten.  Capri has become a chic boutique for the wealthy, and she has passed away.  As an aside, I found this book because it was mentioned in Ali Smith’s chapter in Treasure Places (#2089).