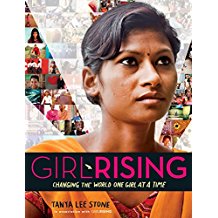 Girl Rising: Changing the World One Girl at a Time, Tanya Lee Stone 2017

This is the fifth of the seven books nominated for the Vermont Book Award in 2018, and like the other four, it is unlikely that I would ever have read this book had I not decided to review all  of them for my newspaper column, BookMarks.  The book takes its title from a 90 minute film created in 2013 that features interviews with nine girls who escaped desperate situations in India, Nepal, Cambodia, Haiti, Peru, Ethiopia, Sierra Leone, and Afghanistan to pursue an education.  The book includes these nine and a number of other girls and their stories.  Perhaps most importantly, Stone provides information and data to put the crisis of young girls prevented from getting education in a wider, global perspective.  World-wide, more than 62 million girls are not in school. Stone convincingly presents the argument that this is not just a personal tragedy for these girls, but a terrible loss for the world.  Education has a ripple effect: the educated girl is likely to marry later and have fewer children and there will be fewer infant and maternal deaths. She is able to get a better job and she will be healthier and live longer.  So what stands in the way? Perhaps the two biggest barriers are poverty and traditions, such as selling a female child into slavery or indentured service and child marriage.  The difficulty is that these practices are an ingrained part of many cultures in the developing world.  Despite the despair and tragedies of many of the girls’ stories, Stone closes the book on an optimistic note.  The alphabet soup of NGO’s working to better the lot of girls around the world is an encouraging sign, and the examples in this book should serve to inspire both donors, activists, and governments to more actively support these efforts.