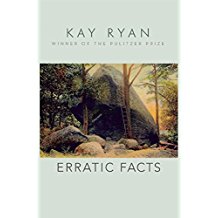 I had to read this slim collection of 62 poems twice before feeling capable of summing it up and even now, I wish to transcribe nearly all of them to give a sense of the beauty, cleverness, and ‘hair-raising’ combinations of the ‘best words in the best order’ that enables Ryan to emerge as a first rate poet.  The poems are all less than one page in length (with one exception), narrowly enjambed, and frugal in their word play.  The usual themes of death, memory, and the contingency of life are here, but Ryan is quite alone in her ability to play word games with them that leave the reader going ‘aha’ over and over again.  She is especially good at using common phrases to title and theme her poems:  token loss, fool’s errand, treading water, fatal flaw, shoot the moon, and more of the same are all turned, twisted, enlarged or microscopically examined in service to her poetry.  Epigrams introduce many of the poems, especially by my favorite Sebald. In trying to decide what phrases or poems to quote, I was in a quandary, but here’s a small taste of her insight, cleverness, and beauty in a poem entitled, Ship in a Bottle:  It seems/impossible—-/not just a/ship in a/bottle but/wind and sea./The ship starts/to struggle—an/emergency of the/too realized we/realize.  We can/get it out but/not without/spilling its world./A hammer tap/and they’re free./Which death/will it be,/little sailors?