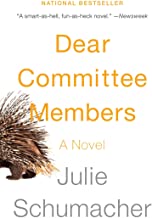 Sent as a gift to me by a friend who happens to be a Nobel Prize winning chemist, this book has sat on my shelf for the last several months until i finally felt guilty enough to pick it up.  I’m thrilled that I did.  It’s the funniest and most insightful book about the world of academia that I’ve ever read.

It is a novel that consists entirely of LOR’s (i.e. letters of recommendation for those of you who have never been asked, begged, pestered, and otherwise accosted by students, fellows, children of friends, et al asking you for a LOR) written by one Jay Fitger, Professor of English and Creative Writing at the fictitious Payne University, a second tier school somewhere in the Midwest.

Fitger comes across in many letters (especially to the Dean, Department Chairman, and other officials in the University as sarcastic, bitter, and angry, but his keen sense of humor and his razor sharp intellect and wit are also employed in support of many deserving and talented students.  Whichever kind of letter he writes, though, effectively translates the inside baseball politics of Payne—the renovation of the  Econ Department’s quarters with their ‘fleu di lis emblems on their doors’ which means the English Department resides in a ‘hazardous waste’ environment; the reduction in English faculty numbers due to ‘financial constraints’ while Payne builds climbing walls and saunas to attract students, etc.  Through it all, however, Fitger shows concern for his students and a deep, though well-concealed, caring for his institution and above all, for his discipline of literature and writing.  We also get a clear sense of his bumbling romantic intuitions in his letters to his ex-wife and ex-girlfriend.

I spent 40 years at the Harvard Medical School, half as an academic physician striving for promotion, office space, budget dollars for FTE’s (i.e. employees), etc, and half as the Chief Operating Officer of two of Harvard’s teaching hospital saying ‘no’ to professors who were striving for promotion, office space, budget dollars, etc.  Having seen that world from ‘both sides now’ (to quote Judy Collins), my favorite saying is that “conflicts in academia are so intense because the stakes are so small.”  Reading Schumacher’s book reinforced that impression, and it did so in a funny, laugh out loud manner that left me with a melancholic nostalgia for that lost world.  Enjoy this one!

The Wild Braid: A Poet Reflects on a Century in the Garden by Stanley Kunitz...