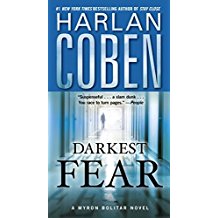 Coben’s outstanding cast of characters are back in this complicated and rather sophisticated crime story—Myron Bolitar, the former All-American basketball star at Duke, head of  MB SportsReps, and erstwhile private investigator; Esperanza Diaz, his partner and former pro-wrestler known as Little Pochahantas; Windsor Horn Lockwood, III, otherwise known as Winn, a very wealthy financial advisor who provides backup and muscle for Myron.  What starts out as a very, very funny Chapter 1 featuring Myron’s parents, quickly turns dark with parallel story lines of Myron’s old girlfriend’s son who needs a bone marrow transplant to survive and a series of kidnappings and serial killings.  There are more starts and stops in this book than in most entire series, and they keep things moving though I was often a bit lost.  Coben’s way with metaphors (his Mom’s baked pastries tasted ‘suspiciously like a urinal cake”) kept me laughing and, as usual, everything is resolved happily in the end, but it’s a dark and dangerous ride getting there.  Eager for more Bolitar!

Fasting and Feasting: The Life of the Visionary Food Writer Patience Gray, Adam...
Scroll to top