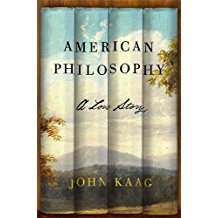 Kaag, a Professor of Philosophy at UMass Lowell, has written an imperfect but fascinating book, interweaving the end of his first marriage and beginning of his second with a deep exploration of American Philosophy.  Starting with Emerson and moving through the Transcendentalists to the Harvard Pragmatists—Pierce, James, Royce (both James and Royce had lived on Irving Street), Palmer, and Santayana and Hocking—-he builds his story around his discovery of West Wind, the 400 acre estate and incredible library of William Ernest Hocking (1975-1966).  While in Chocurua, NH to attend a philosophy meeting at the local library (William James had built a summer home in Chocurua in 1886 and was a frequent hiker in the woods and hills there) , Kaag plays hooky and ends up at West Wind through chance.  This leads to a relationship with the granddaughters of Hocking who are at a loss as to what to do with their grandfather’s extraordinary library, the recipient of the libraries of his Harvard colleagues and chock full of first editions from Hobbes to Hegel, from Emerson to William James and even including a signed first edition of A Boy’s Will,  a gift from Frost who was a friend and frequent visitor.  The descriptions of the various schools of philosophy at times proved to be tough sledding but the fascinating connections and allusions with Jane Addams, Agnes Hocking (the founder of Shady Hill School when the Hocking’s lived in Cambridge at 16 Quincy Street), Pearl Buck (a late in life love interest of Hocking’s), Frost, May Sarton (who attended Shady Hill in the first class), the French existentialist Gabriel Marcel, and the two James brothers made for great reading.  The bottom line was the questions that philosophy was trying to answer: James’ lecture at Holden Chapel in 1895 entitled ‘Is life worth living’ and the existential problem of ‘how to live a creative and meaningful life in the face of our inevitable demise.”  Good summaries by Alfred North Whitehead who said, “Philosophy begins in wonder.  And, at the end, when philosophic thought has done its best, the wonder remains.”  Kaag’s efforts along with his new wife resulted in many of the Hocking volumes resting at the O’Leary Library at UMass Lowell.  Well worth a visit.