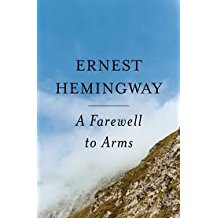 A Farewell to Arms, Ernest Hemingway, 1929

WWI rages at the Italian/Austrian front and the American volunteer lieutenant, Frederic Henry, falls in love with the British nurse, Catherine Barclay.  He is wounded badly by a trench mortar, recovers with her TLC in Milan, and is caught in the disastrous Italian retreat from Caporetto, the worst Italian defeat in the war and the prelude to Mussolini’s power grab in the 1920’s.  Henry’s ambulances become mired in the rain-soaked fields; one of his drivers is killed; he escapes to Milan and then deserts and flees with Barclay to Stresa on Lake Maggiore.  As he is about to be arrested, they row up the Lake and into Switzerland where they enjoy a wonderful several months in the Swiss winter above Montreaux before heading to Lucerne for the baby’s birth.  All ends badly in a tragic and tearful conclusion.  A classic war and classic love story in Hemingway’s inimitable style—flat, laconic, and real.